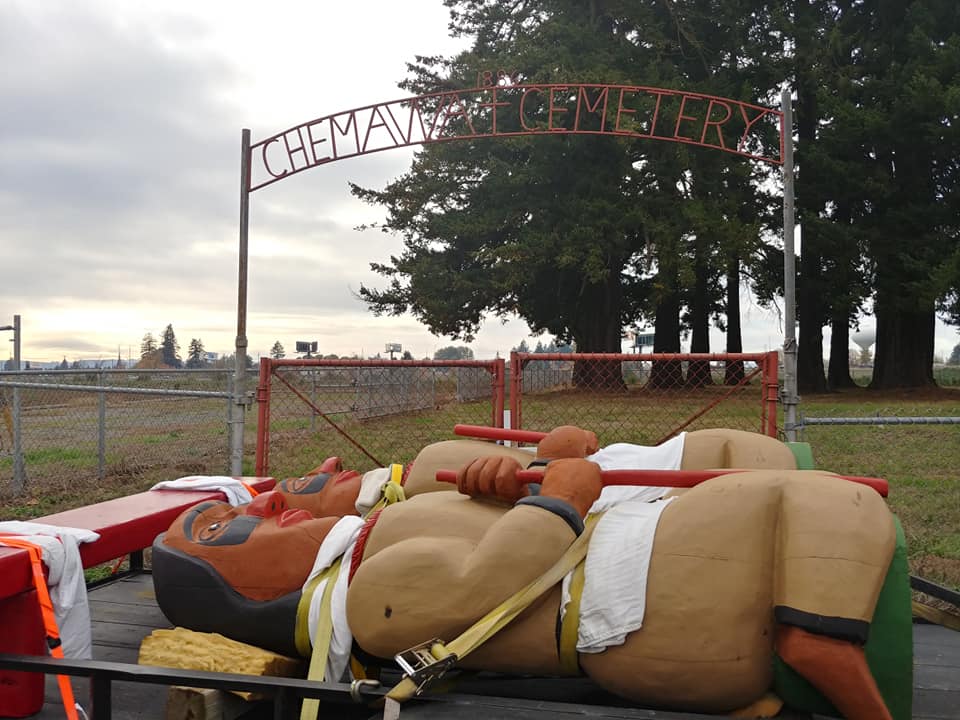 Master Carver Jewell James often speaks about the legacies of colonial violence in Indigenous communities. It does not take much to connect the dots between what happened in the residential school systems across North America, including the theft of thousands upon thousands of Indigenous children from their families and communities, to assertions of First Nation and Indigenous communities for environmental rights, political reconciliation and social justice. The exposing of ongoing settler colonialism, as communities and sacred lands continue to be extracted from, is evident in recent House of Tears journeys that have focused on liberating the captive Orca Sk’aliCh’elh-tenaut (aka Tokitae or Lolita) from her 50 years of captivity at the Miami Seaquarium and returning her home to the Salish Sea where her family still lives. For Lummi, these Orca families are relatives, the Qwe ‘lhol mechen or “people that live under the water” and the theft of the, mostly young, Orca relates directly to the theft of their own children. The parallels are striking and something that the House of Tears bring up when sharing the story of the 80+ stolen Orca children in the 1970’s. The recent discovery of the remains of 215 children at a residential school in Kamloops, BC is shocking and horrific news but not an isolated incident or unfamiliar. Jewell often speaks about the community relations and connections across the US-Canada border, including how the residential schools operated. In fact, the #RedRoadtoDC totem pole itself has symbols expressing the connections to Canadian First Nations. On this journey, you will hear Jewell talk about the “copper” and the “Seawolf and Seabear” symbology of this pole expressing these ties, which are often familial but also relate to connections forged through these familiar patterns of settler colonization.

Freddie Lane has been a leader and valued member on the Totem Pole Journeys throughout their history and speaks often of his own experiences at the Chemewa Indian School in Oregon. The House of Tears journeys have spent time at the school in the past and the recent Chemawa stop on the Red Road West Tour in advance of the cross-country #RedRoadtoDC journey was a return for the House of Tears Carvers to Chemewa (click here for coverage of the visit in the Salem Reporter). Freddie wrote on May 14th, as the journey did a blessing ceremony outside the school, of “the railroad tracks that brought thousands of American Indian children to Chemawa Indian Boarding School run by the US government. The train came through and reminded us of the American Holocaust.” Lummi were one of the many Coast Salish Nations who saw their children stolen away to this particular facility, which is discussed in this 2007 article from the Bellingham Herald. House of Tears member Siam’elwit wrote on her 2018 visit to Chemewa about “blessing song and prayers for the two healing poles gifted to Chemewa Indian School in honor of the 300 plus boarding school children who never returned home to their families.” Here are some photos from that visit and the May 14th one on the Red Road West Tour: